It's About Time -- and Morality 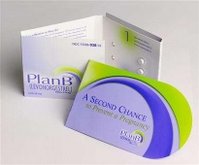 Victory at last! Three years after its own advisory committee said that emergency contraception should be available over the counter, the FDA announced this morning that pharmacies could now sell Plan B without a prescription to women 18 and over. As I blogged earlier this summer, the decision to still require adolescent women to obtain a prescription within 72 hours of unprotected sex is a political decision not one based on medicine or science. Still, today's decision is a victory for those who have worked so hard to bring this medicine to American women, long after women around the world have had easy access to it.

I'll leave it to my secular sister organizations to tell you more about why this decision is medically important. It's morally important though because it is one more way that women can avoid an unintended or unwanted pregnancy. I heard some anti-choice person on the radio say that today is a tragic date for women and their children. But, it is precisely because life is sacred and parenthood is so precious that new life should never be created carelessly or because a condom broke or because intercourse was forced or because people got swept away. It's hard to understand how every person who opposes abortion isn't working with us to assure that every sexually active woman has easy access to contraception, including Plan B.
Posted by Debra W. Haffner at 1:33 PM

A weird aspect of the whole debate about Plan B, etc. was that these drugs were too risky. According to the WHO, the risk of pregnancy is far greater: 20 per 100,000 as opposed to the risk of 5 per 100,000 with RU-486 and the like, assuming one could prove a link between the deaths and the drug.

The real tragedy to me, however, is how mothers and children are treated. For example, the American College of Obstetricians and Gynecologists published these findings in 2003:

I just don’t understand how anyone who calls themselves “Pro-Life” could be doing anything other than trying to help impoverished mothers and their children.

Some oppose because some religious perspectives need something to fight against to validate their assumed superior status.