Last Week the White House, This Week the United Nations 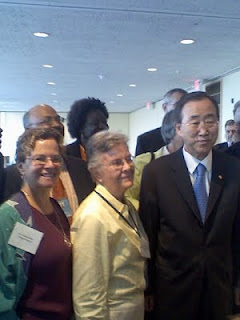 That's me with Bon Ki-moon, the Secretary General of the United Nations and Sister Joan Kirby, the President of Religious NGOs at the UN last night.
I'm at two days of a UNFPA (United Nations Population Fund) "International Faith-Based Organization Roundtable" with religious leaders from around the world. The Religious Institute, Catholics for Choice, and Religious Coalition for Reproductive Choice were included as progressive religious leaders, along with religious leaders from much more conservative FBOs like World Vision, the Salvation Army, and the Adventists. We're all here to advise UN agencies on how to best incorporate faith-based organizations in their work. The panels have addressed what I suspect UNFPA sees as common ground: HIV/AIDS, gender-based violence, and maternal mortality.
I was invited to speak on the panel on HIV/AIDS, but of course used it as an opportunity to talk about religion and sexuality and the need to break the silence about sexuality in faith-based organizations. I was a bit apprehensive, since during the first four hours of the meeting none of the other speakers had explicitly addressed sexuality, despite being at a meeting sponsored by a UN organization that has family planning at its core.

The memory of my friends who have died of AIDS gave me the courage to be explicit about my recommendations that faith communities are called not just to care but to help prevent transmission through honest education, witness and justice. I said explicitly that it was past time for us to recognize that people have sex outside of monogamous heterosexual relationships -- they have throughout history, and if we want to end this epidemic, preaching abstinence and monogamy is just not enough.

But I also offered recommendations for reaching out to faith leaders. I'll share more of that with you tomorrow.
Posted by Debra W. Haffner at 10:15 PM