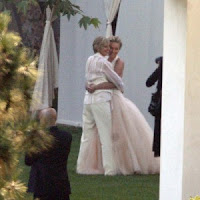 I "borrowed" this picture from a celebrity web site -- it's Ellen and Portia's wedding from this past weekend, and when it popped up as a yahoo headline, I thought to myself "how far we really have come."
I am generally an optimist, but there are days when as a minister and an advocate, I feel discouraged, especially when I'm being attacked from either the left or the right.
But, this picture reminds me that we are moving towards a world of sexual justice where two women celebrities marrying are featured because they are celebrities, not of the same sex.
And if that seems like I am naive, just think about other recent advances. See for example my post from last week about social evangelicals taking credit for the Democratic platform calling for a reduction in unwanted pregnancies and abortions through comprehensive sexuality education, widespread family planning, and better supports for women who want to have their pregnancies go to term as well as more support for adoption. Finally, the goals of the pro-choice community are being seen as the middle ground they have always been. (See Frances Kissling's hard hitting post on this over at RH Reality check or Jim Wallis' article in the Sojourner's newsletter for more.)
Or, think about John McCain's muffled comment at Saddleback on marriage about supporting civil protections, Now, he didn't quite say civil unions but it was close. Or about the recent votes in Massachusetts or the Supreme Court decision in California -- or the wedding pictured above. There is no question that we are getting closer to marriage equality in this country than we could have dreamed even a decade ago.
There was a point in my work in sexuality education as President of SIECUS where I realized we had WON the major conflict, that the "battles" were now about content, but not about whether schools should teach sexuality education at all. (You probably don't remember that in the late 1960's the John Birch Society said that sex education was a Communist Plot and asked in a widely distributed booklet, "Is the Little Red School House the Place for Raw Sex?") The culture has decided that young people need information and education, even as some communities fight abstinence only or talking about contraception and STD prevention as well.
Looking at Ellen and Portia beam in this picture, I wonder if we're not close to that place about sexual orientation...thinking about the Democratic platform, to that place about reproductive rights.
There are of course tons of rights still to secure, but there is no question that we are moving towards justice. Call me naive, but I'm ready to celebrate along with the Degeneris-DeRossi's.
Posted by Debra W. Haffner at 6:00 AM

Yes, it's time we acknowledge and celebrate our successes related to sexual justice. Yes, there is more work to do, and yes, we will have setbacks, but to really see the growth and changes with our eyes and hearts is inspiring, validating, and necessary. So glad you are proposing and championing our change in perceptions.

I find it somewhat funny that celebrity gossip can bring us closer to sexual justice and equality, when so often I think that this sort of "news" makes things worse as we try to work towards healthy portrayals of sexuality and relationships.