Like many ministers, I face an occupational hazard when I go to see movies, watch television, read a book. The stories so often form as future sermons in my mind, that I some times feel all entertainment should be a tax deduction.

But, last Friday night, a friend and I went to see Crazy. Stupid. Love, seeking a complete diversion and an opportunity to laugh.

And I did laugh -- as well as cringe at some of the sexual messages, especially the attitudes about casual sex and the lack of any visible signs of contraception or STD prevention, no less sexual negotiation or limit setting. But, it was the end of the movie that really upset me, in that it portrayed illegal adolescent behaviors.

I contacted my friend Nell Minow, who is the "Movie Mom" for Beliefnet.com as well as hundreds of radio stations around the country. (Read her at www.blog.beliefnet.com/moviemom

She encouraged me to write Steve Carell, the producer and star. I thought you might enjoy reading the letter I sent him. Even better, write him one yourself. I'll let you know if I receive an answer!

I am writing to you as a certified sexuality educator and an ordained Unitarian Universalist minister who is concerned that your new movie, “Crazy, Stupid, Love” models behaviors for teen and tween audiences that puts them at risk for legal action. I am the author of several books for parents on talking with their children and teens about sexuality, and I have worked with adolescents on responsible sexual behavior for many years.

There are several sexual messages in the movie that I disagree with, but I am most concerned about 17 year old Jessica giving 13 year old Robbie nude photos of herself that she took. It is illegal for anyone to create sexually explicit images of a minor, to possess such images, or to distribute them. Although it may seem nonsensical, several states have passed additional laws that make it illegal for teens to take and distribute such pictures of themselves to other teens. Indeed, because of their age differences, depending on the age of majority in the state, Jessica might also be charged and convicted as a sexual offender for exposing a minor to child pornography. In some states, she could face life in prison or have to register as a sex offender for life. Further, the gender of the characters reinforces a stereotype that teen boys cannot be victims of child sexual abuse, when in reality, a boy is most likely sexually victimized by a teenage girl.

These are fictional characters – but their actions may well be repeated by young people in your audiences. I know that your movie is out in general release, and I don’t know what can be done by Carousal Productions at this point to get out the message, “don’t’ try this at home”. But, I do know that PG-13 movies shouldn’t be modeling criminal behaviors as harmless or worse, acts of generosity.

I would welcome hearing a response from you. Please let me know if I can provide you with additional information. 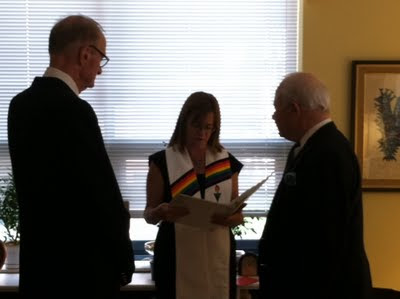 Yesterday, I performed a legal marriage ceremony in New York City for two 87 year old friends of mine who have been together as a couple for 56 years.

Six years ago, I led a ceremony for them celebrating their 50th anniversary. I promised them that I'd do all I could to help create the day that I would be able to do their legal wedding.

Yesterday was that day.

Kenneth, Peter, two witnesses, and I signed the marriage license in the middle of the ceremony. All of us present, including me, had tears in our eyes when I said, "By the power vested in me by the state of New York, I now pronounce you husband and husband, legally wed."

I blessed them in part with these words, "Peter and Kenneth, we all know that your holy union of two lives, two souls, two hearts is far greater than a legal union sanctioned by the state. But we are grateful that this day for equality has finally come. We are grateful for the blessings that brought us to this day, and ask for continued blessings on your home, your health, your companionship, your friendship. May we all hold these moments, this moment, in the blessed spirit of all that is holy."

May I invite you dear readers, along with those who were present with us yesterday, to bless them with your "Amen."