It's not often that we get to watch history being made. But as I watched the news this morning and saw colleagues standing in front of the Supreme Court, my heart thrilled knowing that inside the Justices were hearing the first arguments in a Supreme Court case that the Religious Institute was participating in as an "amici"--a friend of the case. Today, the Court will hear a case on the constitutionality of Proposition 8, the California law that bans same sex marriage. Tomorrow, the Court will hear the case on the constitutionality of DOMA, the Defense of Marriage Act, the bill that Bill Clinton now wishes he had never signed.

I've been working on marriage equality for more than a decade, although I remember distinctly that after the attempt to legalize marriage in Hawaii was turned down, it seemed more realistic to work for civil unions than marriage.  The first version of the Religious Declaration on Sexuality Morality, Justice, and Healing called for clergy to support "the blessings of same sex unions" because civil marriage seemed like too remote a possibility. That was only 13 years ago.

My commitment to marriage grew when I went to New Paltz, New York in 2004, under threat of arrest, to perform marriage ceremonies for same sex couples. Two of my Unitarian Universalist colleagues had been arrested the week before, standing outside of Mayor Jason West's office in the tiny upstate New York town. This week, six of us went, fully garbed in clerical robes and stoles, prepared to be arrested to marry six more couples.

The first couple we married were two men in their late sixties in matching ties and blazers. They had been together 35 years. One of their 93-year-old mothers had flown up from Florida. Clutching her purse in a borrowed winter coat, she cried as my colleague pronounced them married. She said to me, "I've waited all my life to see my son married."

I knew at that moment that civil unions would never be enough.

That same year, I led a meeting of theologians to develop the Open Letter to Religious Leaders on Marriage Equality. It declared, "where there is love, the sacred is always in our midst." The Open Letter has now been endorsed by more than 2800 clergy from more than fifty faith traditions. It's been used in historic battles in California and Maine, and echoed by religious leaders in states across the country. The Religious Institute has played an active role in educating faith leaders about marriage equality and providing them with the theological framework to use in their pulpits and in the public square. 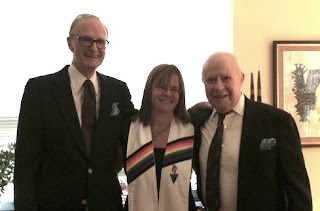 I cheered when Massachusetts became the first state to have marriage equality in 2004. I was thrilled when I finally got to say the words, "by the power vested in me by the state of Connecticut" when I marriage two women shortly after Connecticut made marriage legal. I had the honor of marrying two 87-year-old men who had been together for 57 years when marriage became legal for them in New York.

And one day, I hope to officiate at the legal marriage of my son and his to-be-chosen future partner, knowing that he will have the same rights as my daughter and her soon-to-be husband, as I have had with my partner of now 31 years. And that those rights won't only be in Connecticut and New York and 7 other states (plus the District of Columbia), but will be recognized everywhere.

My prayers today and tomorrow will be with the lawyers and the Justices and all those who have worked so hard to get to this day. Where there is love, the sacred is in our midst.
Posted by Debra W. Haffner at 9:37 AM