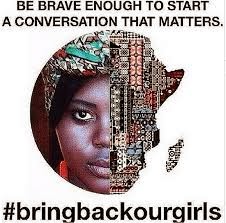 It’s been almost a month since more than 270 young women were kidnapped from their school in Nigeria, and only a week since the world’s news media, the United States, and the Nigerian President have starting speaking about this horrific assault.

I first learned about what was happening on May 1st on social media, and tweeted, “If 200+ white girls were kidnapped in London, it would 24/7 headline news with governments sending troops in to help.” I kept thinking about how the U.S. media had been obsessed with covering the stories of one missing white young woman: how Jon Benet, Elizabeth Smart, and Natalie Holloway are household words but that these brilliant school girls in Nigeria weren’t making headlines at all.

I’m glad they are now.  But, I have to ask, “What took so long?” And “if thousands of social media activists hadn’t responded, would they be headlines now?” I want someone in the media to acknowledge that they were wrong in not covering this as soon as it was known.  I want there to be searing analysis about how we are not in a post-racial era at all.  I want there to be coverage of how it is that there are men willing to enslave young women because they wanted an education and that there is a market of men who will buy them.  I want world leaders and media leaders to acknowledge that sexism and racism still permeate the world. I want the world to redouble its commitments to women's education and women's safety.

As a survivor of sexual assault, my heart aches for these young women and the terror they must be experiencing.  As a mother of a young woman, my heart hurts for their mothers who don’t know where their daughters are but do have an idea about what they are going through.   As a minister, I cry out for us to remember our call to take care of the most vulnerable and the most marginalized.

I fear that just like some of the individual kidnappings, too much time has passed for these young women to be found.  But, I will keep praying that they will. And, I will do my part to raise my voice to make sure that the search goes on.  On Mother’s Day, I will light candles for them and for their mothers.  I hope you will join me.
Posted by Debra W. Haffner at 10:39 AM