Out of Iraq, Into Darfur 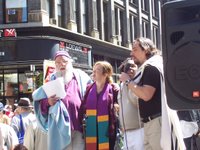 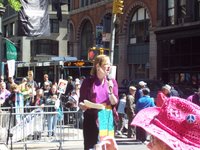 You wouldn't know it from the lack of press coverage, but there were hundreds of thousands of people at the March against Iraq in New York City on Saturday. And despite the lack of cooperation from the New York City police, we did manage to have a worship service before the March. There were Jewish, Catholic, Buddhist, and Christian religious leaders who offered prayers and readings; I opened with a litany for peace grounded in my Unitarian Universalist tradition. My friend Ledell Mulvaney led us in song throughout the morning.

It felt right to be there. I wish I could have been in DC today at the Darfur march. I hope you will participate in your own way to honor immigrants on May 1st. The horrors of the world mean we must speak out, each in our own way. Thank you to Rabbi Waskow and Reverend Sekou for allowing me to add my voice.

Thank you for your work in this struggle. I was at the Pacific Central District Assembly this weekend and heard Rev. Dr. Rebecca Parker give a sermon. She mentioned a friend of hers had called form the march in NYC. She said there was a sign (by the UU's?) saying "this may be the right wing, but we are the rest of the bird." I will be partcipating in the local May Day rallies in my small Northern CA community.