Pat Boone Had One Thing Right: Hate is Hate 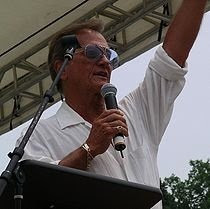 I never understood why my mother's generation of teenagers liked Pat Boone.
Now I have more of a reason to dislike him.
Pat Boone wrote an article this week, which unbelievably said:
"There is a real, unbroken line between the jihadist savagery in Mumbai and the hedonistic, irresponsible, blindly selfish goals and tactics of our homegrown sexual jihadists.”
He was talking about people who worked to overturn Prop 8 in California, but I'm guessing he also meant people who support a broad range of sexual justice issues. The connection is reminiscent of those who blamed 9/11 on gays and feminists -- or Katrina on the pro-choice movement or the illicitness of New Orleans. I also remember the Focus on the Family article that labeled me "the high priestess of immorality."
His article was titled "Hate is Hate in India or America."
You're right about that, Mr. Boone. And it is your hate speech against all of us who believe in marriage equality for same sex couples that needs to end. Do you think Mr. Boone knows that biblical passage, "love your neighbor as yourself?"
Posted by Debra W. Haffner at 6:00 AM

"Do you think Mr. Boone knows the Biblical passage 'love your neighbor as yourself.'"

I'm going to say something awful.

Of course he knows it. But it doesn't count, because Jesus said it. Mr. Boone is probably more interested in the Paulean teachings.